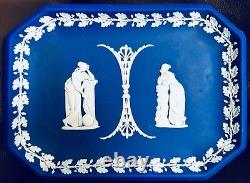 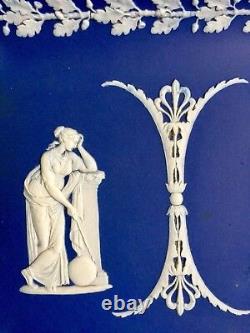 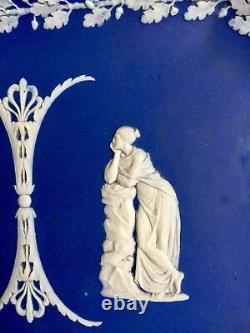 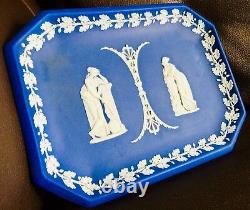 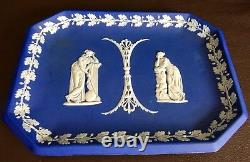 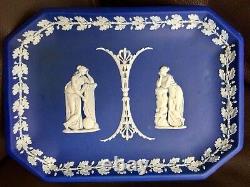 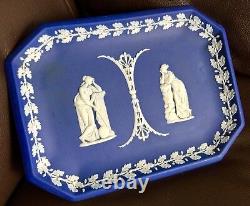 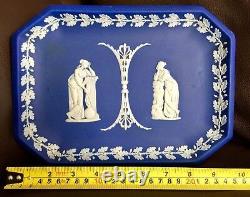 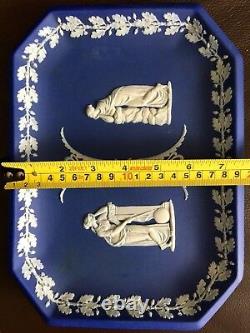 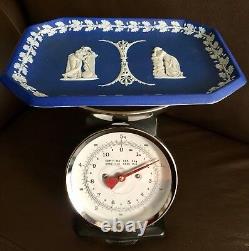 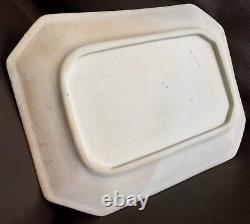 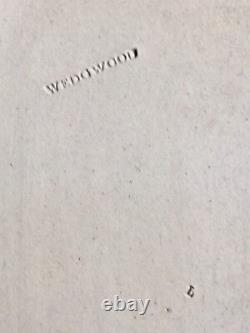 Rare Antique Georgian Ea rly 19th Ce ntury (circa 1800s) Heavy Wedgwood Cobalt Blue Jasperware Tray (10/25cm, 900g). Please browse all 12 photographs for size, weight and condition as the photographs are self explanatory. Lovely heavy dish in good condition. There are no chips or cracks but there are signs of ageing and slight discolouration. Please note this item is Antique, around 200 years old and not new so condition is as in pictures and commensurate with age. The Georgian era is a period in British history 1714 to 1830. The kings were all named George: George I, George II, George III and George IV. The sub-period of the Regency is defined by the Regency of George IV as Prince of Wales during the illness of his father George III. The definition of the Georgian era is often extended to include the short reign of William IV, which ended with his death in 1837. Jasperware, or jasper ware, is a type of pottery first developed by Josiah Wedgwood in the 1770s. Usually described as stoneware, some authorities have described it as a type of porcelain.

It is noted for its matte and unglazed biscuit finish and is produced in a number of different colours, of which the best known is a pale blue that has become known as Wedgwood Blue. Relief decorations (typically in white but also in other colours) are characteristic of Wedgwood jasperware. They are produced in moulds and applied to the ware as sprigs. Josiah Wedgwood and Sons, commonly known as Wedgwood, is amongst the world's most famous fine china, porcelain, and luxury accessories company founded on 1 May 1759 by English potter and entrepreneur Josiah Wedgwood.

Josiah, the youngest of 13 children, founded his company in 1759. He was a perfectionist who took 3,000 attempts to get just the right shades of chalky blue and sage green for his most popular Jasperware.

He made his name when he manufactured a tea and coffee service for Queen Charlotte, wife of King George III. Her Majesty was so impressed she allowed Wedgwood to use the title Potter to the Queen. Soon other royal households, including Russia's, were clamouring for Wedgwood pottery. Josiah was a benevolent employer who built good homes for his workers but he could also be a demanding taskmaster.

If a vessel did not meet his exacting standards he would smash it and shout: This will not do for Wedgwood! His company became the first to innovate the perfect mixture of fine bone china which was both durable and beautiful to the touch. Before he succumbed to cancer in 1795 Wedgwood passed his company on to his sons.

Many descendants were directly involved in the business over the years and it thrived throughout the 19th and most of the 20th century. Were it not for a bout of smallpox the name of Josiah Wedgwood would have been lost in the mists of time.

The disease severely weakened his leg and he was unable to work the pedal of his potter's wheel. Faced with the loss of his livelihood the enterprising apprentice turned instead to designing ceramics. Josiah had a keen eye and an interest in the latest advances, such as new glazes. His designs were unlike the typical clunky wares on the market in the early 18th century and were soon gracing the homes of the aristocracy and royal palaces. Production at Etruria Works in Stokeon-Trent, Staffordshire, could barely keep pace with demand.

Quite simply Wedgwood is considered the finest potter to have lived and his name is famous far beyond these English shores. The vast Wedgwood collection of pottery, art and manuscripts is regarded as one of the most important industrial archives in the world. The names were merged to become Waterford Wedgwood with a workforce of almost 8,000 at its peak but its fortunes began to decline. On 2 July 2015, Fiskars Corporation acquired WWRD. Original UK made Wedgewood products are now real collector's items as production of English porcelain has mostly moved abroad to the Far East.

Cobalt blue is a blue pigment made by sintering cobalt oxide with alumina at 1200 °C. It is extremely stable and has historically been used as a coloring agent in ceramics (especially Chinese porcelain), jewelry, and paint. Transparent glasses are tinted with the silica-based cobalt pigment smalt.

Cobalt glass-known as "smalt" when ground as a pigment-is a deep blue colored glass prepared by including a cobalt compound, typically cobalt oxide or cobalt carbonate, in a glass melt. Cobalt is a very intense glass colorant and very little is required to show a noticeable amount of color.

Cobalt blue glass is also used as an optical filter in flame tests to filter out the yellow flame caused by the contamination of sodium, and expand the ability to see violet and blue hues. Cobalt glass is popular with collectors and is appreciated for its attractive color. This item is in the category "Pottery, Ceramics & Glass\Decorative Pottery, Ceramics & Glass\Vases".

The seller is "santoor-uk" and is located in this country: GB. This item can be shipped worldwide.